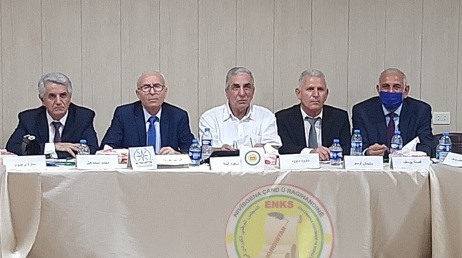 The “Peace and Freedom Front” is a political coalition consisting of – the “National Kurdish Council” in Syria, the “Assyrian Democratic Organization”, the “Arab Council of the Euphrates and Al-Jazeera” and “Syria’s Al-Ghad movement”.

The Front contains bodies aligned in their goals and political vision and have established mutual trust through cooperation and common interests.

The Front stresses that its work and the work of the bodies making it, does not conflict with their membership in the opposition platforms that work through the Syrian Negotiations Committee and others.

The Front makes effort to open up and work with all the opposition democratic bodies in order to find a common ground between the various political organizations and coalitions, and to come up with an inclusive project that actualize Syrians ambition in achieving drastic change and build a modern State, suitable for the level of the sacrifices Syrians made.

The Front works according to these principles